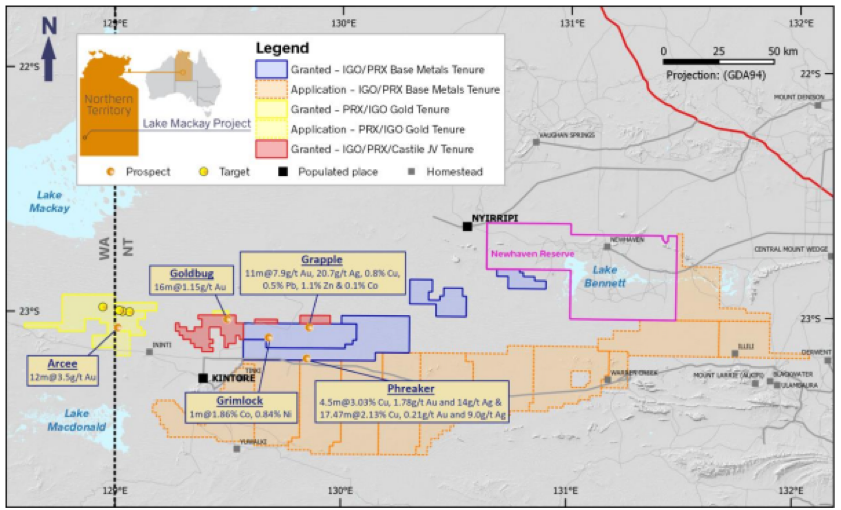 The Lake Mackay Project is subject to a Joint Venture Agreement with Independence Group (ASX:IGO). IGO has earnt 70% in the base tenements through the sole funding of $6 million of exploration expenditure. In 2022 it was announced that IOG would transfer 40% interest in the Gold Tenements back to Prodigy1 through the sole funding of exploration programs at the Phreaker deposit (diamond drilling) and on the gold tenements (RC Drilling).

The Lake Mackay Project is located 400km northwest of Alice Springs, adjacent to the Western Australian border, and includes 12,833km2 of exploration licences and applications (11,933km2 IGO/Prodigy Gold JV, 900km2 IGO/Prodigy Gold/Castile JV). This emerging mineralised belt at Lake Mackay is at a very early stage of exploration. Prodigy Gold is executing an exploration program as part of a joint venture with IGO to continue the evaluation of the Lake Mackay Project. The Project has a consolidated tenure over the favourable Proterozoic margin between the Aileron and Warumpi Provinces, and is characterised by a continent-scale geophysical gravity ridge and the Central Australian Suture. The JV partners consider that the exploration potential will unlock a new metallogenic province hosting multiple styles of precious and base metals mineralisation.

Work planned for the coming period includes follow up diamond drilling of the Phreaker prospect, as well as RC drilling around several gold targets on either side of the NT-WA border.

Orogenic fluids are proposed to have infiltrated shear zones and leached gold and other metals from mafic sills of the Du Faur Suite. The timing of gold mineralisation at the two prospects remains uncertain. Several episodes of metamorphism have occurred in the Aileron Province from the Paleoproterozoic through to the Paleozoic. The mineralisation could have formed at any time after the deposition of the metasedimentary host rocks (Lander Rock Formation) and the emplacement of metamafic sills (Du Faur Suite) into the metasedimentary succession early during basin formation. The entire Lander Rock Formation package (from greenschist to granulite facies) and the ca 1.84–1.81 Ga mafic intrusions they host (and correlative units of these) remain prospective for orogenic gold mineralisation (or metamorphosed equivalents).